House prices in the UK have risen to a record level, according to a report from the Office for National Statistics (ONS).

The average house price in the UK now stands at £247,000, the highest figure since the index was first calculated back in the 1960’s.

However, this data is according the ONS, as Halifax reported earlier this month that the average house price was £170,733 – dramatically less than the figure quoted by the Office for National Statistics. The difference in value comes down to a difference in methodology, as the ONS index used actual transaction prices, whereas Halifax use mortgage approval information.

To get an idea of the accuracy of the calculations, we’ve taken a look at the House Price Index from the Land Registry: 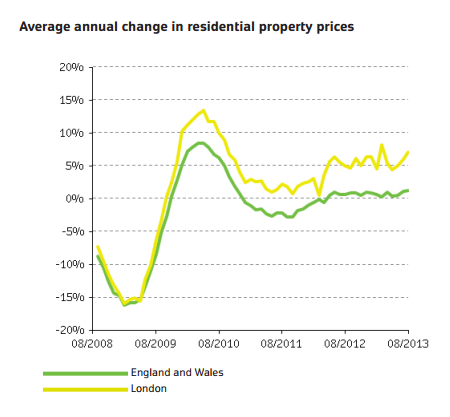 We can see from the index above that house prices in both London and the UK as a whole are gradually rising, although they’re still nowhere near the peak reached between 2009 and 2010. According the Land Registry, the average price of a property in London is £389,066, in comparison with the average for England and Wales of £164,654.

The difference may be down to the fact that the ONS Index is skewed slightly by the consideration of high priced London properties, which bring up the average for the whole country. The figures from Halifax and the Land Registry however appear to be giving a figure excluding London – both would seem to have some validity depending on how you look at it.

Another interesting piece of information is the annual price change by county: 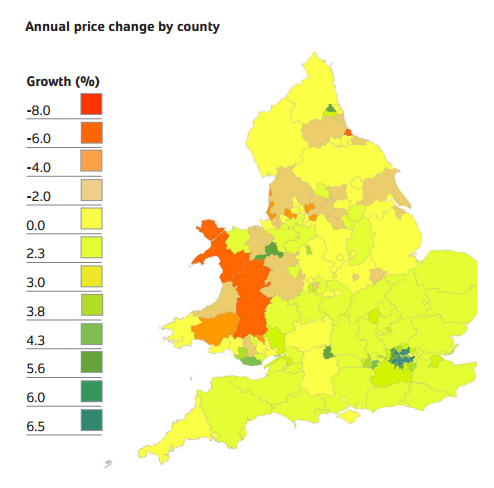 This gives us a slightly different insight into the UK house market, as it reveals the specific areas that are rising (or falling) instead of taking the country average as a whole.