Like most men, my other half is an avid gamer. Our lounge is equipped with a TV almost as big as the wall it’s mounted on, and the very latest in gaming technology, including the PlayStation VR. He’ll play anything from FIFA to Dark Souls III, and acquires most of his games the day they’re released, even if it takes him weeks to get around to playing them.

Thanks to soaring sales in the gaming sector over the past few years, the video game industry is now worth billions of dollars, and is a hub for innovation and creativity. Humankind’s overwhelming desire to escape the real world and enter a virtual reality has led to the transformation of fun arcade games like Pong and Space Invaders into immersive, mentally challenging, and sometimes frightening experiences. And still we want more.

For now though, let’s take a look at how it all started with this freshly launched Kickstarter project entitled The Evolution of the Games Console. It pays homage to the ever-changing home video game console from its first appearance in 1972 as the Magnavox Odyssey through to 2017’s console-cum-handheld hybrid, the Nintendo Switch.

Each of the 35 consoles featured have been lovingly illustrated by self-confessed gaming obsessive and graphic designer Robert Thomas, and presented as a beautiful art print. But printing will only commence once he has reached his modest funding goal of £500. I can see this being a huge hit with lovers of design and gaming alike, and the muted colour scheme will suit any room. To get your hands on one, simply head over to Kickstarter before 23rd February 2017 and pledge just £15 plus P&P. 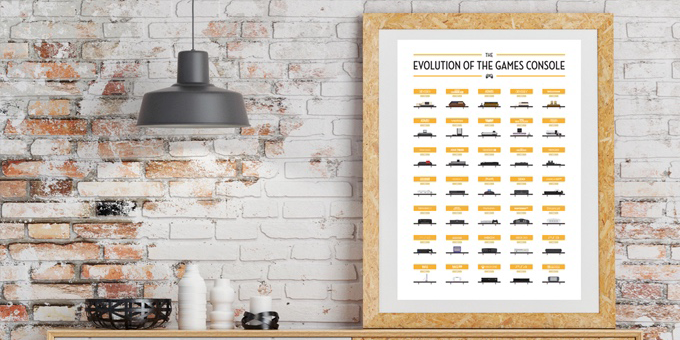 I don’t know what’s next for gaming, but I like to think Charlie Brooker touched on the future with his episode of Black Mirror, San Junipero. I probably wouldn’t go so far as to upload my consciousness to a server after my passing, but for gaming purposes, I think it’s a very exciting prospect. I wonder what the console will look like…