Hundreds of thousands of United States government employees are now back at work, after President Obama signed a new law ending the government shutdown and extending the much-discussed US debt limit.

The cross-party deal, which came just hours before the US government risked defaulting on its loans, raises the$16.7tn debt limit – funding the government to 15 January and extending the US Treasury departments’ borrowing authority until 7 February.

Whilst the deal does prevent a catastrophic US default in the short-term, it doesn’t resolve the budgetary issues that have so strongly divided Democrats and Republicans. Instead, it has established a committee of legislators from both parties that will now need to craft a more long-term budget deal – reporting back to Congress by the middle of December.

After the deal was agreed President Obama thanked the Congressional leaders for their input in reaching an agreement, but added that both sides had “inflicted completely unnecessary damage on our economy”. He also added “how business is done in this town has to change.”

What is the debt ceiling?

The debt ceiling is the limit on the amount of money the United States government is allowed to borrow in order to pay its bills. When this limit is reached it hits a ‘ceiling’, meaning no additional money can be borrowed by the government.

The following infographic from World Solo explains the concept – and the current state of US borrowing – quite nicely: 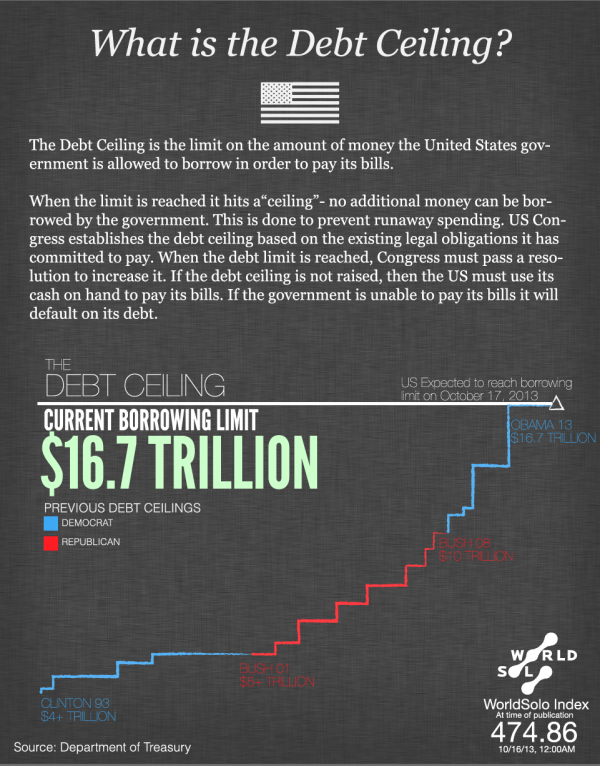