Four men have been arrested and are being questioned under the Terrorism Act in a series of armed raids by police officers across London.

The men, who were arrested yesterday evening in Whitechapel, Peckham and Bayswater and currently being detained on suspicion of the commission, preparation or instigation of acts of terrorism. Searches at another six addresses across the capital are currently continuing.

Eyewitnesses to the arrests have said that there appeared to be a high level of planning and co-ordination from the police, suggesting the alleged terrorist plot had been monitored for some time. Whitehall officials confirmed today that the plot was ‘potentially very serious’.

The raids mark a rise in arrests under the Terrorist Act from last year, but there is still a dramatic drop from the peak in 2005/06. The chart below shows the number of arrests year on year under both the Terrorism Act 2000 and under other legislation: 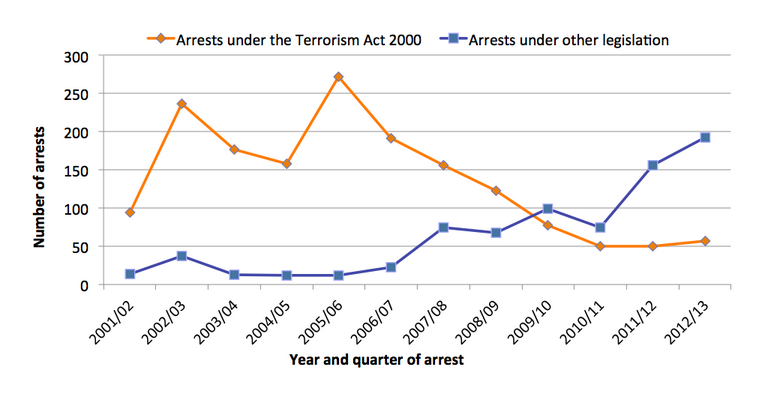 The arrest numbers however don’t tell the full story, as the number of charges resulting from terrorism-related arrests also make interesting reading: